Preparing for Stage 2 of a WebKit Exploit 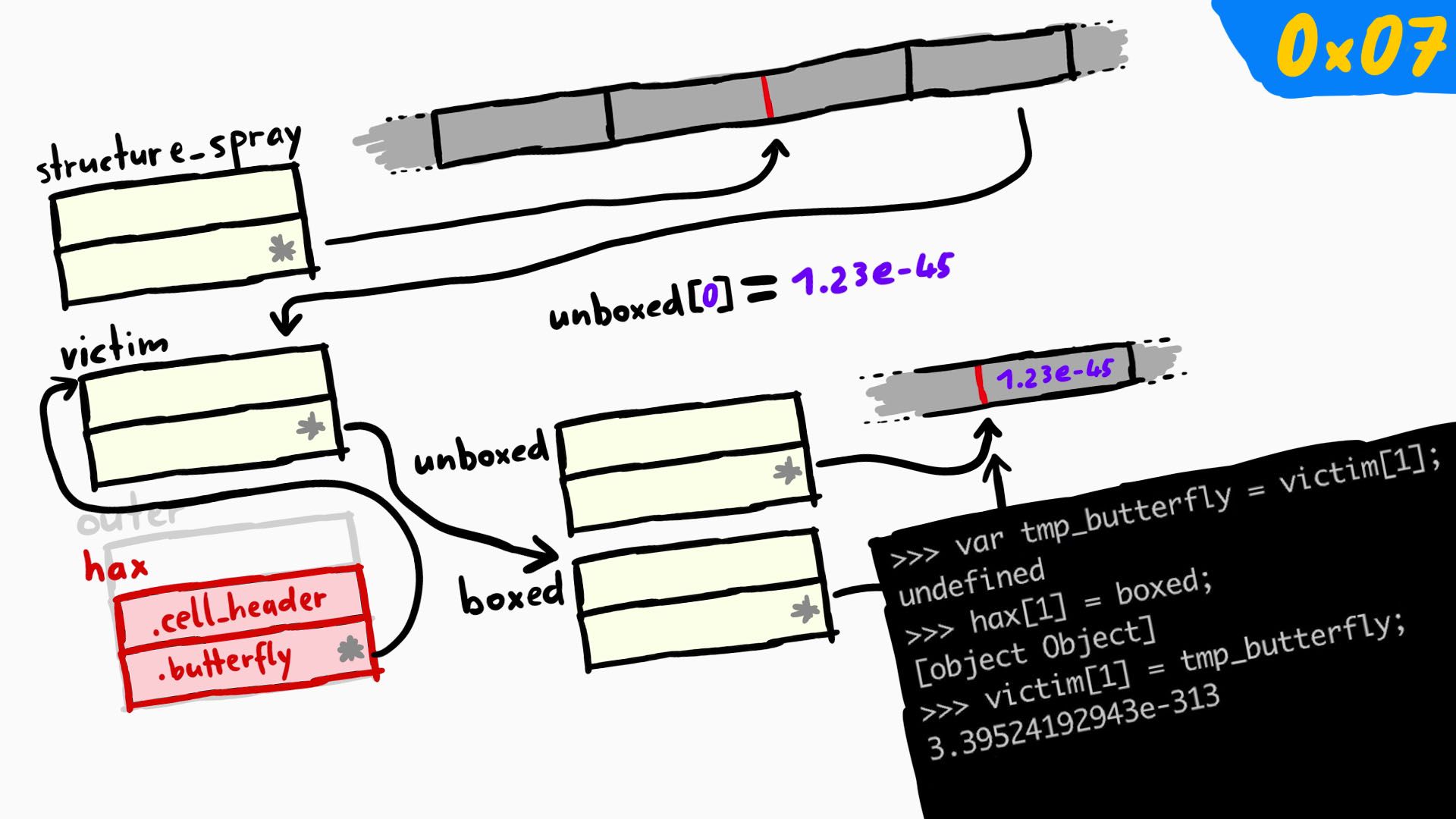 TLDR
Setting the foundation for an arbitrary read/write (and re-implementing addrof and fakeobj).

Like saelo in his phrack paper Attacking Javascript Engines, we have to think about a  plan of exploitation. We've already built the first stages which were the addrof and fakeobj primitives, so from now on our goal is to obtain an arbitrary memory read/write primitive through fake JavaScript objects and the question we need to ask ourselves is "What kind of object do we want to fake?". In this post we won't be achieving an arbitrary read/write primitive just yet, but we'll create some beautiful messed-up memory that serves as a strong foundation.

In Linus's exploit, he was building some WASM buffers and WASM internal memory objects. WASM is short for Web Assembly which is a fancy browser feature, and Linus was using it to craft an arbitrary read and write primitive. The web assembly part doesn't really have much to do with web assembly itself, but the underlying principle.

Let's have a quick peek into the Mozilla Developer Documentation (MDN) to learn what a Web Assembly memory object is.

The WebAssembly.Memory() constructor creates a new Memory object whose buffer property is a resizable ArrayBuffer that holds the raw bytes of memory accessed by a WebAssembly Instance.

Anyway, I really try to wrap my head around what exactly Linus is building here, but it's really mind-bending - here are some of my notes trying to walk through the code.

This looks crazy, at some point there are these object trying to overlap and even pointing to themselves, and then you have the whole WASM thing, either way, it's crazy and all over the place. I didn't fully get this, maybe I need to revisit it later point, or you can have a look at it. But, to continue, I'll be walking through the exploit using the same bug, but written by Niklas, because it seems clearer.

To start understanding Niklas's exploit, I've removed the proof of concept code that we had about faking objects and start over by just keeping the addrof and fakeobj primitives.

Let's go step by step to understand this exploit. Like in our proof of concept code where we had a loop to spray objects for new structure IDs, we also have a loop here.

We have a structure_spray array which holds all the sprayed array objects. Inside the loop, we iterate a thousand times and create an array which has only one value 13.37, which makes it an ArrayWithDoubles type. We assign a property a and also create another 'p'+i, finally push the array to the structure_spray. Then we pick one from the middle and assign it as victim. Now we can look at the structure_spray and the victim to see how they look like in memory.

If we look at 0x1077b4340, which is the address of the structure_spray, we see some flags and the Structure ID, but more importantly, if we follow the butterfly 0x10001fa070 we see the array contents. To the left of the butterfly, we have the size of the array and non-inlined elements, and to the right of the pointer, we have the actual elements of the array. I've subtracted 16 bytes(0x10001fa070 - 0x10 = 0x10001fa060) from the butterfly to see the contents to the left of the pointer.

All these array elements are just pointers to the array objects we've created in the spray loop.

We need to visualize the relationship of the objects because it will get a little bit crazy.

Above we see that we have the structure_spray, which is an array of array objects. This means it has a butterfly with elements. And we also picked one of these elements and called it victim and victim also has a butterfly. We can confirm this by looking at the memory.

As you can see, we have the properties and length to the left of the butterfly, and we see the actual element to the right side of it. The object structure_spray and victim currently look like the following in memory.

Now we can use our addrof and fakeobj primitive to craft a fake object.

First, we create an outer object with two properties - cell header and butterfly. The butterfly is pointing to the victim object.

The two properties cell_header and butterfly are inlined, so if we add 16 bytes  (+0x10) to the address of the outer, we get the fake object hax. Here's how it looks like.

Now to the exciting part, we start by creating two new arrays, call one unboxed and the other boxed.

unboxed is of type ArrayWithDoubles which means it deals with raw doubles. boxed is ArrayWithContiguous, deals with JSValues which can be pointers, doubles or integers. Both arrays have a cell header and a butterfly of their own. This is still normal.

But let's do something freaky!

Here's the entire flow of how this looks like.

Now, why is this strange setup necessary? Well if you think about it, we have two different types of array objects point to the same location, unboxed deals with just raw binary double values but boxed deals with JSValues. boxed can hold integers, doubles or objects in the form of pointers. So this is similar to what we achieved in the original bug with addrof and fakeobj primitives. Since these two original primitives required the JIT type-confusion to work, it's not good to rely on them over and over again, we can maybe make them a bit cleaner to work with. And so we have boxed and unboxed now. Both have the same butterfly but think it contains different types. So now we can construct the same addrof and fakeobj in a cleaner way.

For example we can assign a double to the unboxed value (expecting raw doubles). And if it looks like a pointer, accessing this value from boxed, would interpret it as an object. And of course vice versa.

It looks a bit cleaner,  except if you look at how messed up the memory looks like. But I think it depends on whom you ask, for me it's beautiful and mind-blowing!