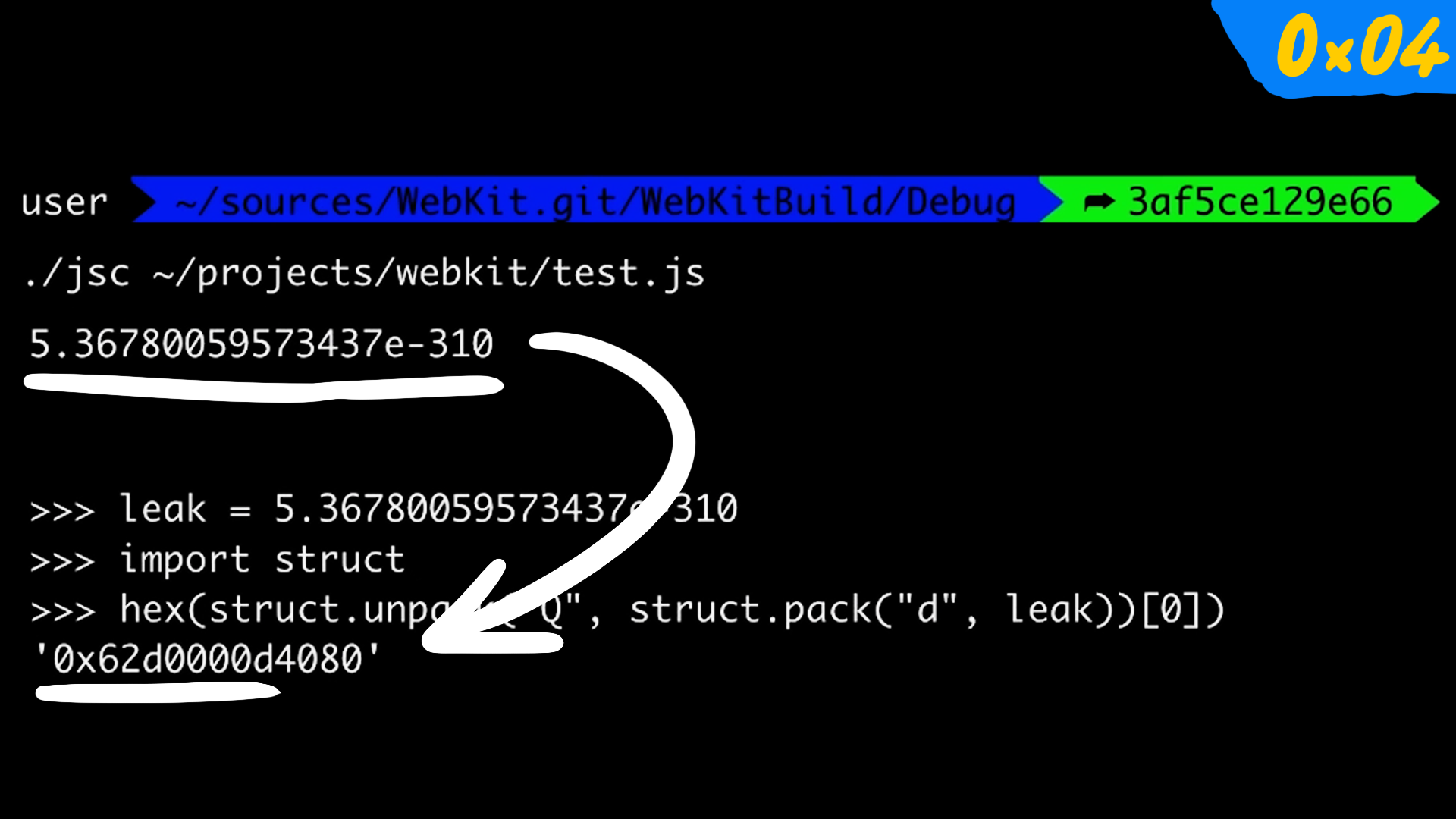 TLDR
JIT type confusion to leak the address of an object.

So far we've gained some jsc internals knowledge, and we've also seen the exploit in action. So in this post it's time for us to tackle the actual exploit by Linus. From the source, and looking at the index.html, we can see that there's a pwn.html file. Following that file we see some javascript files being included.

As you can see there is more than one file, we'll learn what these files do later, but we'll start with pwn.js. The script is quite long, about 536 lines of code and the code performs all the magic to eventually get arbitrary code execution which means it will take us some work to understand the different steps involved in achieving the goal. But let's not get overwhelmed and stop, let's start at the top and look for some things which we are already familiar with.

I want to start by looking at the first two functions, addrofInternal() and addrof(). We'll start by copying these two functions into a different javascript file test.js for us to fiddle. As you can guess from the name,addrof() is a function which is supposed to return the memory address of an object. To test it out, let's create an empty object and call the addrof() function on it.

We can use jsc to test this out.

If you get an error like dyld: Symbol not found, that's because you need to set the dynamic loader framework path to the debug build directory in mac like shown below.

Now if we try to run the file in jsc,

we see some strange looking number, but we already know that the address looks a bit strange, so we can use python to decode it.

There we go! 0x62d0000d4080 is our address, and to quickly confirm this, we can use describe method to see some info on the object.

And it matches, which confirms that it's a real address leak. But how does the exploit get this address? From what we can see, the addrof and addrofInternal somehow leak the address, so let's start by looking at addrof.

On a high level, it looks like the function has a loop, which runs for about 100 times, and every time it loops, it calls the addrofInternal function. Then it checks if the result is not of type "object" and the result is not 13.37. The comment indicates that it was necessary to have two functions, basically wrapping one in another and it was due to the exploit failing in some situations. This means that the real magic happens inside the addrofInternal function, so let's look into that!

lastIndex is a read/write integer property of regular expression instances that specifies the index at which to start the next match.

From the WebKit blog about debugging, we learned about different environment variables which helps us during the process of debugging, and there's an interesting variable JSC_reportDFGCompileTimes which will tell us when something is optimized by DFG or FTL. Additionally, I also added a print statement to the wrapper function addrof to see how many attempts it takes.

Now if we run it with JSC_reportDFGCompileTimes=true, we see the following.

From the above image, we can see that there were two different attempts made. The first attempt failed, and the AddrGetter function is optimized twice - once with DFG and then FTL. However, in the second attempt where it worked, it only did DFG, and I thought maybe we ran the loop too much, and we didn't really need the FTL optimization. So if we don't want the FTL, we need to reduce the number of iterations. So let's change 100,000 to 10,000 iterations.

Now if we run again, the exploit works right away, so we can now remove this wrapper and call this directly. Clean!

The next thing I did was to check out JSC_dumpSourceAtDFGTime environment variable, as it shows all the JavaScript sources that will be optimized, which will show us the issue.

As you can see it shows the functions which are optimized and in our case it's AddrGetter. This function uses match, so in the image, above we can also see that this method is inlined and optimized the RegEx match. This might look strange, but as it turns out, some core functions of the Javascript Engine like match are written in Javascript instead of C++. And during optimization, the functions which are written in Javascript can be inlined like in this case for faster execution. You can find the source code of the match function in builtins/StringPrototype.js.

We can also see that the engine inlined and optimized the Symbol.match code, which can be found in the builtins/RegExpPrototype.js.

As you can see, the code does check for side effects! If it does have side effects then it would call matchSlow, if not, then it calls regExpMatchFast. Now if we look at the patch for the vulnerability, we can see that they added a check to this hasObservableSideEffectsForRegExpMatch function.

This checks if the lastIndex property of the regexp is a "number" because in our exploit we had an object with the toString function instead of a number. So they developers forgot a case in the side effect check!

By the way, the regExpMatchFast is not a function, it's more like an "op code/instruction" and you can see this in DFGAbstractInterpreterInlines.h.

There's a big switch case that takes a node from the graph and checks it's opcode. Inside we have a case to check for regExpMatchFast. Interestlingly, above it, we have RegExpTest and there it calls clobberWorld - which we know means, that the JIT can't trust the structures of the object anymore and bails out. The comment there is also interesting:

Even if we've proven know input types as RegExpObject and String, accessing lastIndex is effectful if it's a global regexp.

So I guess they did think about accessing the lastIndex could execute arbitrary Javascript leading to side effects and thus destroy any assumptions made... but it was forgotten for regExpMatchFast.
Really cool stuff, isn't it?