The fakeobj() Primitive: Turning an Address Leak into a Memory Corruption 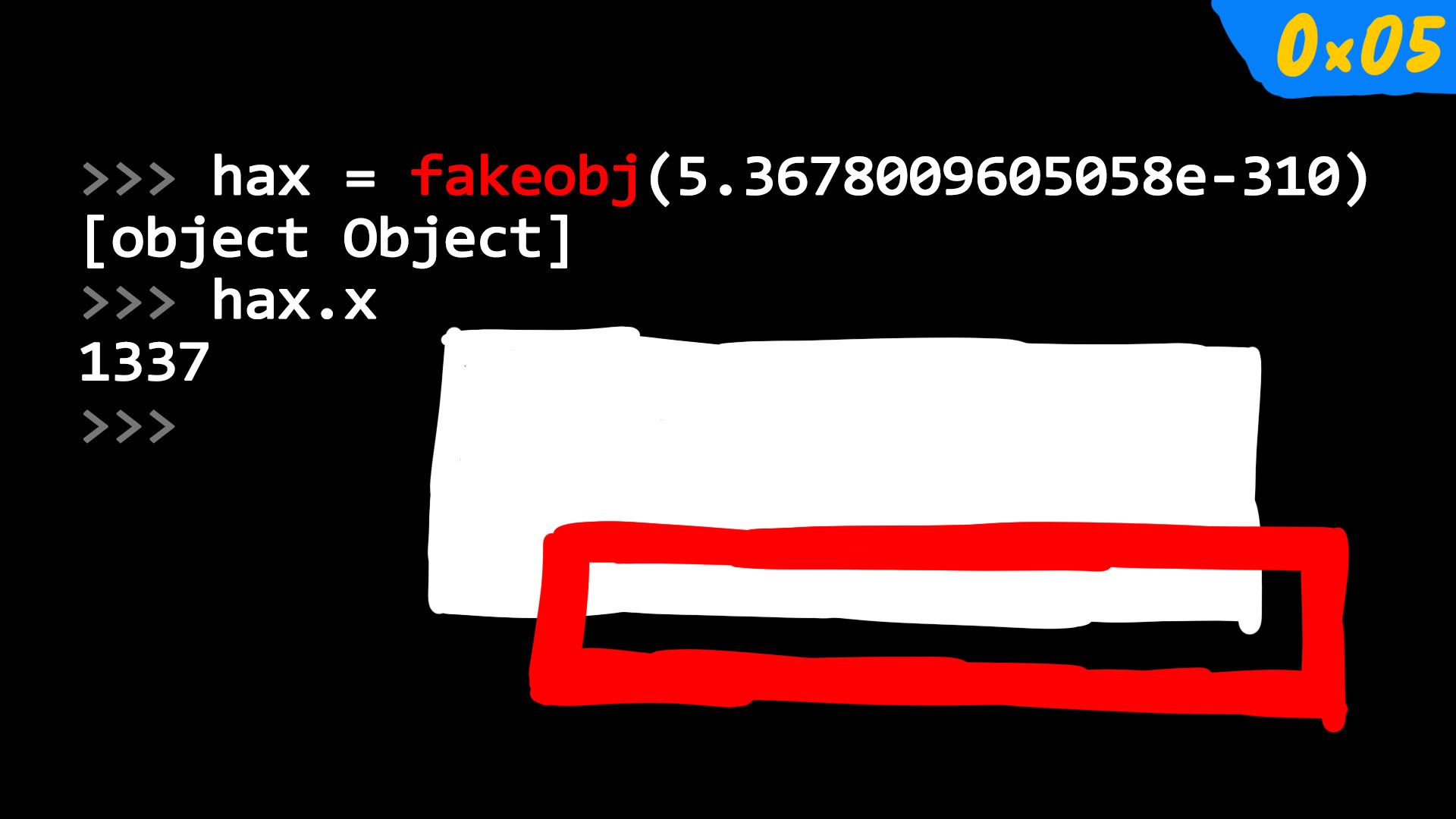 TLDR
In this video we introduce the fakeobj() primitive. It's based on the bug used in addrof() and allows us to corrupt the memory of internal JavaScriptCore objects

From the last blog post we've seen how we can leak the address of a JavaScript object; now it's time for us to see if we could achieve a memory corruption. Before jumping into the code, it's crucial that you have a basic understanding of how a JavaScript object looks like in memory (with inline properties and the butterfly) because, in this post we will use this knowledge to turn a memory leak into a memory corruption.

You might wonder how can we turn this memory leak into something that allows us to compromise the JavaScript engine. Well, it's a not as easy as a simple buffer overflow where you get to control the instruction pointer directly. The bug we have here gives us some capabilities, but we need to do more to turn it into something powerful.

In saelo's article, he talks about two primitives - addrof and fakeobj. We've already used addrof to leak the address of an object in memory, so now let's look at the fakeobj one.

The fakeobj primitive works essentially the other way around.  Here we inject native doubles into an array of JSValues, allowing us to create JSObject pointers.

Remember from this post, the JSValues are stored 32-bit integers with this format where the highest bytes were  FFFF like shown below.

This is precisely how we found them in memory, however when you add a JavaScript object into an array, then you store a pointer, which is the address to that object. So if addrof primitive uses this idea to read the pointer to an object as a double, can we also reverse this so that a double is interpreted as the pointer to an object? Well, that's precisely what we are going to do now.

Let's copy the addrof code and start modifying it.

Here is what changed:

Let's try to craft an object, but first, let's run jsc with lldb attached to it and also let's run our JavaScript file in an interactive mode.

Let's keep this simple and create an object with a single property x which is a simple integer.

Looking at the object, we see that the 0x0100160000000126 has some flags and the Structure ID, together they are a JSCell Header. Then we have a butterfly which is null (0x0), followed by the inline property x which we set to a 32-bit integer with the value of 1. Now keeping this in mind, let's try to fake such an object.

One of the most clever parts of this exploit is that while faking the objects, we can abuse the fact that the first few properties of the object is inlined and not placed into the butterfly. But let's see first how this object looks like in memory. Notice how the properties 1, 2, 3 show up?

Now let's just test our primitive. We can use addrof to get the address, and then we use fakeobj on this address. This means hax should now be the same object as fake.

If we use the fakeobj function now, JavaScript will think that the new offset is the JavaScript Object, but in our case, it doesn't look like a valid JavaScript object because it's missing the flags, the butterfly and the inline properties. Since we control the inlined properties, we can try to craft a valid Javascript object.

So we want to write a fake structure ID that matches the real Structure ID into the first property. But since we don't have a handy function like describe in browsers, how are we suppose to read the Structure ID of the test object at run time? Well, we already know that we can create a new structure and get a new Structure ID every time we add a new property onto the object.  So we can abuse this to spam and then guess a valid Structure ID.

We create a lot of these test objects with the property x but also an arbitrary other property to force new Structure IDs. Basically, we spray test objects.

If we look at the last test object that was created, we see that there is our x property, but also there's this other arbitrary property, but most importantly it has a huge structure ID. So if we randomly pick a Structure ID of let's say 0x1000, we should be very certain that we get one of those test objects. Theoretically, this could also fail, and it could so happen that the Structure ID was not our target test object, but we can really increase our probability by spraying more objects.

Now this double should be a valid JSCell header for our fake object and we can assign it to the property a.

The scheme we have implemented encodes double precision values by performing a 64-bit integer addition of the value 2^48 to the number.

Now we have the right value 0x0100160000001000. Next, we have the butterfly, and we want this to be 0, but how can we do that if the JavaScript adding ffff at the beginning? It's very simple; we can set it to some value and just delete the property which will throw away everything and place 0x0.

Now everything looks promising, so let's place all of this into our test.js script.

Running this will spit out the usual address of the fake object.

Now let's try to use the fakeobj function to see if this created a object.

There we go, we have an object at 0x62d0007de890, which means we made jsc think that hax is an object, but those are actually just properties of our fake object. This means that if we change the property on one would affect the other.

This might seem a bit useless to you, but imagine the power we have now. We can craft arbitrary JavaScript Objects, and you control their internal class properties down to the memory level. This is not yet a code execution, but the question we should ask ourselves:

What JavaScript object could we fake that increases our capabilities?

At this point we could go about doing some security research and try to find good objects, but since we are noobs and there are other awesome researchers out there who've asked this question and figured ways out, let's just go with them. So let's see what Linus does in his exploit.

Of course, this is still not an arbitrary code execution, nor does it even try to explain how we get it, but we will slowly get there. We understood yet another crucial part.