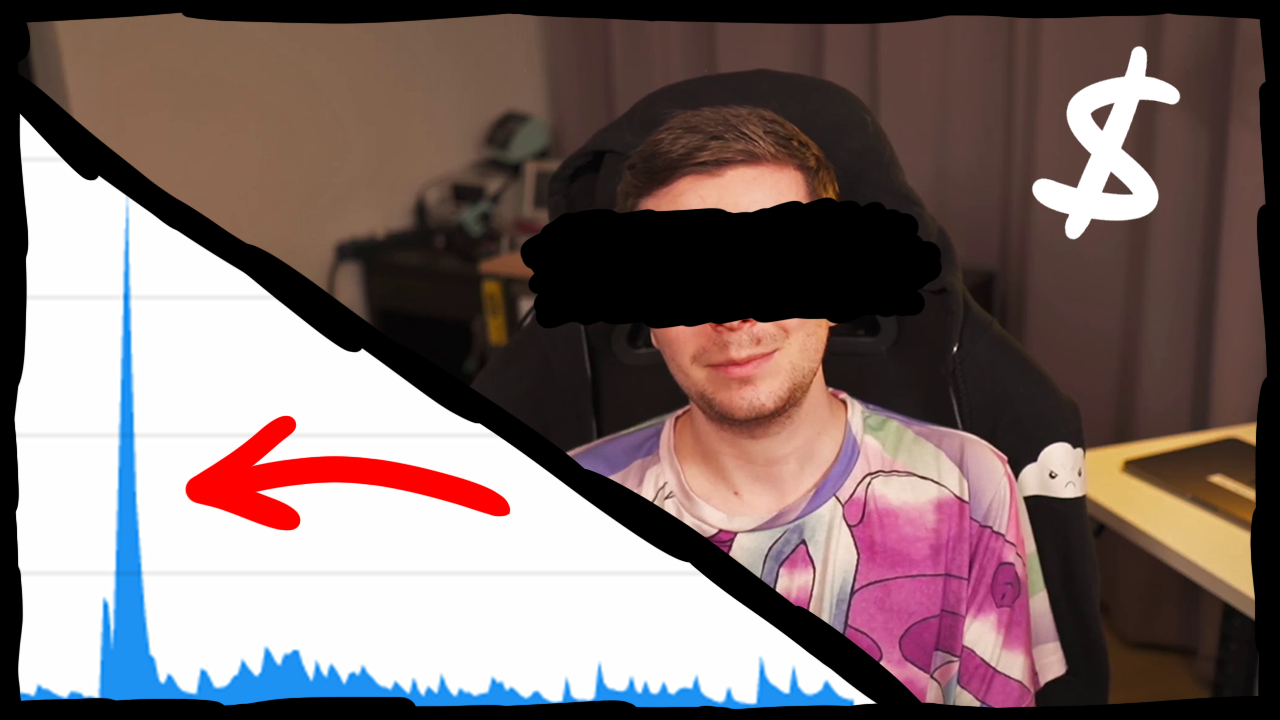 It has been a long time since I have shared some behind-the-scenes information. So in this blog/video I want to cover a few topics: a recap of 2018, the fact that LiveOverflow is now a business since January 2019, some thoughts about money and an outlook into the future.

After that, throughout the summer of 2018, the channel has seen a steady growth.

In November 2018 I got very lucky with the Raspberry Pi video, which went viral with 3.2 million views and catapulted the channel to over 200.000 subscribers, and now even 300.000 subscribers. INSANE!

As you probably know, I have never thought that this kind of growth would be possible for these niche videos. When I started Twich and YouTube I did look for other "hacking" channels and all of them were fairly small (1-10k subscribers). Except Hak5, they had over 200.000 subscribers, however their videos are more casual and more approachable so I imagined I couldn't get to their numbers. I thought 10.000 subscribers for LiveOverflow would be realistic.

I hope it's clear that when I started and throughout the first ~2 years, I did it just because I wanted to share my knowledge and experience. This was my hobby for which I put a lot of my free time and money into.

But now stuff is getting weird - in the recent months I have seen more daily views than Hak5... Of course I'm still riding on the tail of the viral video success, and generally my subscriber-to-view ratio is not great, but that's okay.

So the numbers get more serious now and make even less sense to me. Nobody in this community has seen the same growth. But here is a fun-fact for you: from the YouTube Analytics you can see that most views are coming from the YouTube algorithm recommending my videos.

External sources like Twitter or Reddit have almost no impact. However they are not meaningless to me. It's hard to really care about 1.000 views coming from random people due to the algorithm. But when somebody is sharing my videos on other subreddits, on twitter or on hackernews, it means a lot to me.

Now let's talk about the part that I thought would never matter for LiveOverflow, and that's money.

Theoretical YouTube ad revenue when LiveOverflow was under 100.000 subscribers is soooo low over a whole year, that I could just work 1-2 days freelance work and earn the same. So registering a business to claim this income makes absolutely no sense - the overhead and additional responsibilities were not worth it.

Above 100.000 subscribers (so starting early-mid 2018) it became a bit more interesting with monthly ad revenue in the lower hundreds. While the overhead of a business still wouldn't quite make sense,  there was also a steady growth. So I started to seriously consider it. I spent a lot of time researching different legal entities, how accounting works, how registering a business works etc.

I never thought of myself as an eNtRePrEnEuR, and I despise these awful business YouTubers who talk bullshit and in the end just do network marketing. But dangit, suddenly I'm on a path to become a business owner too.

You might wonder why I have to register a business when I'm already a freelancer. This is because in Germany you can be a "freelancer" by registering a basic personal business, or by becoming a "professional freelancer". In order to be recognized as a "professional freelancers", it requires credentials like a bachelors degree. With that I can then do IT (security) consulting but it also means I cannot earn money through ads, because ads are commercial business. Long story short, I have to register a separate business.

After a lot of research and thoughts I decided to register Security Flag GmbH - a serious business. A GmbH is like a LLC or Ltd., so it comes with a lot of responsibility and monthly accounting work. I decided to do this, because I wanted to try out something that is very different from my freelance work. But because this YouTube channel doesn't really pay much, my freelance work will remain my top priority. So for me LiveOverflow is an experiment and my playground where I can try out what it means to have business - and hopefully learn a lot.

As I mentioned in the recap, towards the end of 2018 I got lucky with the Raspberry Pi video. Fun-fact: that video alone made almost as much in ad revenue as THREE YEARS OF ALL THE OTHER WEEKLY VIDEOS COMBINED. It's insane what kind of multipliers you get with millions of views. But of course that video was a one-hit wonder and I'm curious to see where it will average out.

Additionally to the ad revenue, I have also started Patreon and YouTube Membership, but the money from there is less than the YouTube ad money - and you know from other YouTubers that ad money is pretty low. But I'm super grateful for everybody who pays for something that is free. Thanks!

Adding it all up, YouTube ads + Patreon + YT Membership (and considering taxes), the YouTube channel makes a little bit more than what I earned as a trainee right out of school when I started studying. And that is cool, because that is an amount I was able to live off (in a shared flat and fairly minimally). But of course it stands in no comparison to a salary I would earn given my 5 years of professional IT security experience.

But LiveOverflow has potential. While my freelance work currently pays a lot more, it does scale linearly - the more I work, the more money I make and there is an upper ceiling. And so in contrast, a business can earn money with anything, thus it could also earn much more with less work. Or it could fail and make nothing. Which means a much safer alternative would be to just grind my freelance work and invest the money otherwise. But I thought I'm still young and now is the time where I can still experiment.

But one step at a time. For now I'm still trying to figure out how all of this business stuff works.

Because the money is not enough to consider this as my actual job, it is high enough to re-invest. And as a first action I decided to pursue something I always wanted, but never had the time and energy myself.

I want written articles for all my videos!

For that purpose I have hired a freelance technical writer who will slowly turn my videos into nice blog posts for liveoverflow.com

By the way, the person who is working with me now is no other than PwnFunction - he also has a security YouTube channel and had a great idea to use animated .gifs for the articles. It will take quite a while and cost a lot of money, but I think this will create an amazing resource for IT security and hacking:

I'm super excited about this and I hope that the supporters on Patreon and YT also think that this is a good use for the money.

Anybody who follows me on Twitter might have seen that I'm considering sponsorships as well. This is not easy for me, because I don't want to advertise shitty products like *cough* V P N *cough*. And because I have now quite a large audience, and most companies spend a lot of money on marketing, I refuse to degrade the quality of my videos with ads for small amounts of money. If I sellout and deal with this stuff behind the scenes, it really has to be worth it.

I've had several conversations with interested companies over the past weeks but nothing is confirmed yet. So there could be a first sponsorship video very soon, but it could also be a while.

mhhhh... This is a very difficult topic for me. An original motivation for me was to not gatekeep and everything shall be free. I definitely don't want to take anything away from the free content, however I'm wondering if additional paid courses could fund the free videos. So I'm conflicted.

On one hand a paid course is gatekeeping. On the other hand the alternative is, this paid course would just not exist (I would do this additionally to my free videos in order to fund them).

Or, could I even claim that I have already done more than enough with my free videos and so it's fair to make additional paid content?

Also I'm leaning towards making introductory courses, which means all this information is already freely available ALL OVER the internet - in that case it wouldn't really be gatekeeping, right?

One thing that really bugs me is, that I see a lot of AWFUL "ethical hacking courses" being sold. It's so irritating, especially when I see ads for those on my free videos. So if I had a paid course and advertise it, I would hope I can steal many of those people who want to pay, and instead expose them to my views and opinions on hacking - similar to how I tried to redirect people away from boring Wifi hacking videos to (imo) more interesting topics.

What do you think? Would you be disappointed if I create a paid course? Do you think I should make one? And if yes, what topics would you be interested in?

Have you ever bought a course? What was good about it? But I'm more curious about what makes a course terrible! Please send me an email: liveoverflow@gmail.com

Some of you might know that I have been procrastinating finishing my masters degree for quite some time - mostly due to making YouTube videos. To finally get this done, I have registered my thesis and I have a deadline in under 6 months. This means university has the highest priority right now - it's more important than LiveOverflow and even more important than my paid freelance work.

But I have worked hard and prepared a new series that I want to release soon. Hopefully this provides enough buffer that I can make a few videos in between, and keep up the schedule until I'm done. But if worse comes to worst, I might have to skip some weeks. Sorry :(